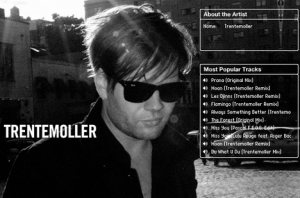 After reading about Trentemøller coming to London for the first of his tour gig to partake in the LEAF – or the London Electronic Arts Festival, you find yourself buying tickets and anticipating for the date. That was still the mood I was in when I entered the Forum, in Kentish Town and saw a very nice mixture of people spread out in a great for gigs venue.

Mystical and misty atmosphere but a milder than expected and hoped for intro. Anders seemed disconnected from the crowd maybe anxious about his first of the planned gigs just after the release of his last album titled Lost.  Too many guitars on the stage and a half times visible base alongside with a great drummer and Anders in the middle with his deck and keyboards, a very unexpected rock band format probably influenced by their recent tour supporting Depeche Mode. Copenhagen vocalist Marie Fisker seemed to occupy a large part of the act, but undoubtedly a sexy talented part. Everyone including Trentemøller seemed to have equal place and time in the show making Trentemøller a band rather than a lone act which is rather weird, if you consider that Trentemøller is in fact Anders’ last name. You are certain that it wasn’t a good night for Trentemøller, when you pick Even Though You’re With Another Girl  as the most memorable moment of the night.

The background setting with light and shape alternations alongside with the dance routine by the girls of the band made it clear that they really wanted the show to go well. However, in terms of getting to the crowd , it was a home victory for “dry ice” smoke effect against a rather awkward performance from Trentemøller.

I had a constant feeling of anxiety, as I was trying to convince myself to enjoy it. It was as if you were on a plane that was speeding on the runway but never took off. It wasn’t until the last twenty minutes of the performance that I decided to stop expecting the night to be better than it actually is and stepped back to enjoy the rest of it. A night of an uncomfortable performance by an otherwise brilliant artist.

One thought on “Trentemøller, the band”