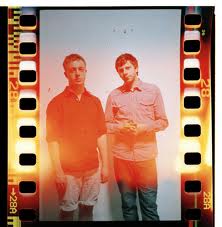 The first signs of winter arrived yesterday night in London with the mass appearance of people wearing scarfs and gloves as they queued outside KOKO with anticipation for the performance of Dominic Maker and Kai Campos, aka Mount Kimbie.

The London duo was formed in 2008 and recently released their second album Cold Spring Fault Less Youth through Warp records joining the celebrated list of bands including Nightmares On Wax, Grizzly Bear, Boards of Canada etc. The genre of Mount Kimbie is often described as dubsteb, a false label to both my ears and my brain as the album also contains strong elements from electronic, indie rock even the jazz scene. The release of their album was great timing for me personally, appearing just when I questioned whether the English electronic scene could ever offer anything new.

KOKO remains a great venue to find a mixed crowd and have a great music night, although on this occasion the venue was so packed that you literally had to fight for your right to get a view to the stage. But the fight was undoubtedly worth it as the boys were changing instruments, changing positions, calling other artists on stage, enjoying their show as much as we were.

The great quality of the sound, due to both the band and their sound engineer, became clear on Home Recording, a personal favourite, which is a so atmospheric, emotional, headphones song that I thought it would be difficult to capture outside of a studio recording, yet the live experience was brilliant. Blood & Form gained a new personality during the live performance, overcoming the controversial album version.

The duo was thanking the crowd after almost every song, which to me seemed as a sign of modesty and appreciation to London crowd. King Krule came on stage to sing along You Took Your Time to crowds acclaim.  The structure of the live was cleverly put as there was a constant uphill to the tempo and mood.  The last twenty minutes  of the night (including Made to Stray) reassured me that there is in fact a new London electronic scene.