I found here earlier this year and I am a bit pissed off that this introduction didn’t happen sooner. She is everything I want to listen to on a Monday winter night, pre Christmas time. She sings about her (or me), love and general life wonders.  Her voice is comforting and familiar and keeps you great company, with a glass of wine. 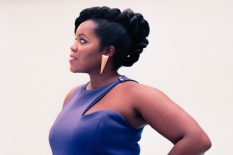 Zara McFarlane comes from a Jamaican family in Dagenham, in the border of London and Essex. She grew up listening to reggae at all family gatherings and R&B of Michael Jackson and Luther Vandross. She studied musical theatre and Jazz vocals and to this day she teaches workshops in vocals and improvisation around Britain. Her debut album, Until Tomorrow, received great reviews and at the age of 27 she was the newest representative of British Jazz to the world. In February 2014 Zara released her second album for Peterson’s

Brownswood label called If You Knew Her, which included a cover of the famous Reggae song from the seventies, Police And Thieves. The album received critical acclaim and she was awarded the title of “Best Jazz Act” at the MOBO awards last October.

All I have to say is that she will definitely worm up the atmosphere of your room, your evening or your dinner party.

“THESE SONGS ON THIS NEW ALBUM ARE MORE PERSONAL THAN ANYTHING I’VE EVER WRITTEN. IT’S ME OPENING UP, TAKING LISTENERS ON A JOURNEY.”